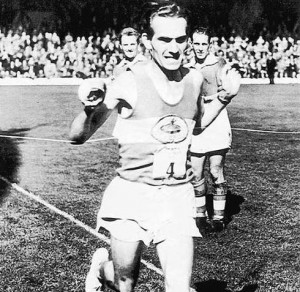 Patrick Keily (18 March 1921 in Derby – 2 March 2016) was a British marathon runner. Originally an amateur footballer, Keily served during the Second World War and, upon his return to England, was placed on the reserve list of his former team and never again made it to the field. He took up long-distance running at the age of 28 and ran in twenty-seven marathons during his career, finishing first in eleven of them and on the podium in six more. He set nine world records. After unsuccessful appearances at the 1958 British Empire and Commonwealth Games and the 1960 Summer Olympics, he retired from active competition, but re-entered the sport at the master’s level in the 1990s.

(Borrowed from wikipedia) “He was, and will continue to be, an inspirational figure for many of Derby’s runners.