Treetops Hospice is this year’s chosen Charity. You can donate using this link (click here)

Cruse was chosen this this year, and despite the pandemic, individual members managed to raise a fair amount for the charity.

This year we are supporting the Padley Group

We are also supporting The Brain Tumour Charity, another cause that made itself personal to the club. Clicking the link will explain how and why… and while you’re there perhaps a small donation? ;-)

A message from Hayley

As many of you may know, I was diagnosed with throat cancer back in October, after a very long battle to find out what was happening to me.

Nothing showed up in any of my tests; bloods, CTs, or MRIs, leaving me unable to walk at times, never mind run and it was only by sheer luck that an ENT specialist noticed a swollen tonsil.

As you can imagine, my children, Lee, my family and friends were devastated to say the least.

As soon as the oncology team took over, I was whisked through the process, hardly having time to catch my breath, let alone digest what was happening to me.

My cancer was the type that is terminal during stage 3, I had already been diagnosed at stage 2!

But I was lucky! The surgeon allocated to me is the only surgeon in the East Midlands that can operate a pioneering Trans-oral Laser, and as such was able to remove everything painlessly and efficiently. I am suffering side effects, but I am currently in remission and not on the immediate danger list.

Not everyone receives this treatment, as not enough people are trained in this type of surgery, and the reason is due to funding.
The team rely on donations directly to their charity fund, as they don’t benefit from the overall Derby Hospital Charity pot, like most other areas.

I would very much like to raise money for this amazing team, to ensure others can benefit like me and to give back, as they support my ongoing treatment. These people saved my life and just a ‘Thank You’ just doesn’t cut it at all!! 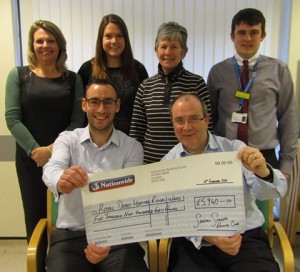 Thanks to Shelton Striders running club who have been fundraising all last year to raise money for the renal ward. From running in the London marathon to having a cake sale and raffles the group raised an amazing £5940.00. Gareth Brown, Hayley-Dawn Ho, Kelly Craven, James Realey and Barbara Brown came to present the cheque to Dr Fluck one of our renal consultants.