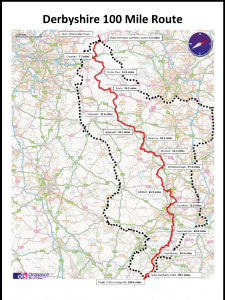 Dave Thornton, Harry Sloan and Andy Brooks are three aged members of Shelton Striders running club (combined aged of 174).  This summer they will attempt to enter the record books by completing a gruelling feat that nobody has ever achieved before.  They will attempt to run the length of Derbyshire non-stop using footpaths and bridleways.  Their journey of almost exactly 100 hilly, muddy and rocky miles will take them from the Dark Peak summit of Black Hill in the north to the village of Clifton Campville in the south.

Why the hell would they want to do that you may ask? Well….in addition to showcasing Derbyshire as one of the best places on the planet to get out for a run or walk, they would like to raise awareness of the benefits to mental wellbeing that can be gained from running/jogging/walking in the great outdoors, and raise funds for a local charity – Derbyshire Mind.

Derbyshire Mind is an independent local charity which delivers a variety of services to support those experiencing or caring for someone with a mental health problem – something which affects 1 in 4 people in the UK. Much of their work relies on donations and 100% of the donations received are used to provide direct services to people needing their support.

The trio plan to commence their challenge at 8am on 27th June at Wessenden Head on the Snake Pass road. They will head south via Black Hill, Crowden, Edale, Tideswell, Bakewell, Rowsley, Matlock, Whatstandwell, Milford, Derby, Swarkestone and Hartshorne to Clifton Campville.  They hope to reach the finish line sometime on the afternoon of Sunday 28th.

As well as seeking donations for Derbyshire Mind they are very keen for people to join them along the way and run some of the route with them, for whatever distance they choose.

They’ll be carrying a tracker so anyone can track our progress on line during the event here.