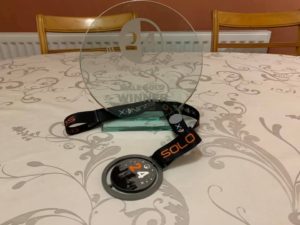 I set off from home at 6:30am as I wanted to be there as soon as I could, get set up and then relax till race prep.
Turned up and straight away found Ray with a perfect pitch next to the route near the start line, this would give me good opportunity between laps to top bottles up and get something to eat.
I had a quick tour round the race village, looking around it looks like everything has been thought off – very impressive set up.

Race brief took place at 11:40 and seemed very long winded – but with having teams, solos and the fun run to explain and lots in between.
Once it moved on to the bits I didn’t need to know, I sorted my final bits of prep.
I decided to put myself mid pack on the start line so it forced a steady start, The race was underway promptly at 12pm
Overall the course was pretty steady – 2 hills Not That Hill and That Hill, it was 50% grass 50% road. The grass was very rutted in places and had been recently cut, so clumps of grass everywhere. It was a little difficult to run on, it was about keep looking where to put your feet which became tough during the night.

The first 4 laps seemed to fly by and felt really comfortable – couldn’t/ didn’t want to run up That Hill so took it steady getting used to the enormity of the hill as it’s not going away.
Results were showing I was first at this point, but it’s early doors so tried to ignore it.
With 100 miles being my target – I decided to use same method as my track 100, I was taking short breaks after each lap and then a longer rest after each 24/25 miles.
With being in the tent I had got my bed but was unsure if I would need it, at 52 miles around 10pm. I tried to catch a couple of hours sleep, but didn’t really work – too much noise and moving around. What did work was having a good rest and legs up, when I came back out I was feeling really good.

Looked on the results board I had dropped to 13th, but over the next 8 laps I quickly moved back up into 4th. Nobody else’s laps were moving apart from the top 3 and then just the leader, I noticed on lap 13th I was really close to 3rd. Could I put in a quick lap to see if I could catch him and I must have done with posting a 1:04 lap and then into 2nd shortly after.
I was now only 15 mins behind the male leader but as we came over the line for the 15th lap, I quickly glanced the results board – we had crossed the line together. I immediately knew which one he was, so didn’t have a break and pushed on to catch him again. He was only 1km up the road, once passing him it was time to set about creating a lead.

Lap 16 came and went, but was now entering the hurt locker to keep a lead. I pretty much walked lap 17 and was feeling jaded. Then asked RD about the rules of starting a lap before noon, does it count if you finish it after noon. Bluntly he said yes followed by if you want to be 1st male you need to go again for 18th lap, it now became a 1 lap race. I had got a 11 min lead, it’s going to hurt but I need to win.

On approaching the final straight I couldn’t see 2nd place, so knew I’d done it. He did finish roughly 3/4 mins, so he was certainly catching me.

Some great pictures from the experience and weekend, the prizes are brilliant and trophy is stunning – they really treat you well.

Great to see Angela and Kev who were there for the night 10k
Well done to Ray Evans in achieving 13 laps
Well done to Kirstine Herbert for her laps as part of a team.

NEW distance ran in a consecutive run, roughly 114 miles in just over 24 hrs.

Honestly I’m knackered and am completely spent, can’t quite believe what I’ve done. I have definitely overachieved in this event.