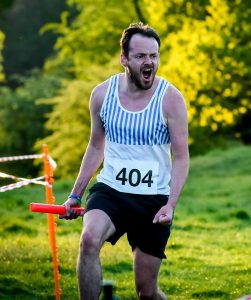 The Starlight Express team of Kenny, Pascale, Shaun and Rachel were once again  the first mixed team home – well they had to be because they were also first team home and forfeited their now customary 3rd. They completed the course in 1:04:13. Shaun seems quite pleased doesn’t he?

An all male team of Tim Staniforth, Richard Green, Matt Henning and Simon Durston-Smith formed for the last race of the series, optimistically calling their team “No Hope”. They came home in 5th place with a time of 1:11:37.

The Night Striders team of Liz Phillips,Julie Corby,Helen Andrews and Jacqui Habgood once again made an appearance coming home 21st in a time of 1:21:00

The Trailing Behind team were this time without Ian Jones, so David Green and Kate Johnson were joined by Charlotte Convey and one other coming home in 1:19:19 in 18th place.

Whether it was the weather or the beautiful location but this event saw 10 teams more than the previous event.

Overall the club was second to Hatton Darts trailing by 36 points.

Starlight Express won the best mixed team competition with a clean sweep of points in the series.

The Night Striders were second in the female competition beaten by a mere 3 points!

In the Sunset Lap Challenge Kenny was second overall while Pascale was second female overall – beaten by one second!