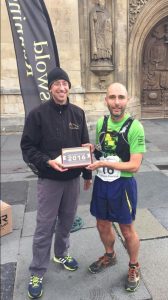 As the name suggests, the race is along the Cotswold Way national trail, all of its 102ish miles from Chipping Campden to the city of Bath via every hill its creators could find.

Of the 77 competitors who put their toes on the start line at high noon on Saturday, 42 (55%) succumbed to the dreaded DNF along the way – a slightly higher than normal attrition rate due, in part, to an almost biblical storm in the early hours of Sunday morning.

Of the 35 that made it all the way to the steps of Bath Abbey, Andy was 3rd finisher in 22 hours 15 mins. The race was won by another local lad, Daniel Hendriksen from Etwall, who retained his title in 21:18.

Many thanks are owed to Dave T for his fantastic efforts as support crew.

On Facebook Andy also said “Gotta be satisfied with a PB (by 2h39m and the first PB at any distance since 2003) and 3rd position.

Epic race with almost zero flat, and a biblical storm in the middle of the night to make things interesting.

Slight twinge of disappointment though. Having worked my way up from 24th at 14m CP to 2nd at 60m, I held that position for over 9 hours before being overhauled with 3.5 to go by a guy who had the most incredible last 10. Not helped by me loosing about 40mins and doing 3 ‘bonus’ miles due to navigational challenges during the storm between 3-4am.”